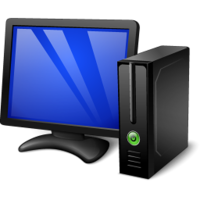 PCSwift sets the standard for PC and internet optimization software. A combination of our two products PCSwift and Throttle; PCSwift instantly makes your computer faster and fixes common problems associated with frustrating slowdowns and errors and squeezes out every last bit of performance your computer and internet connection is capable of. Do you remember when you first turned your brand new computer on and how fast it worked? With PCSwift and a click of the mouse you can bring back this speed to your computer instantly. PCSwift quickly scans your computer for common problems and fixes them, it then makes several permanent changes to Windows so your computer feels like it is brand new once again. Don't deal with a slow computer and make tasks take longer to complete, install PCSwift and make your computer run faster.  Over time as you install new and updated software, you get the impression your computer is slower due to these applications being more demanding of faster hardware. PCSwift makes your computer faster by making several changes to Windows settings; for instance it turns off several animations that degrade performance, instructs the CPU how to prioritize background tasks, how files are loaded and written to the hard drive, changes to the way memory is used when programs use the memory swap file and the overall speed of your internet connection and latency.  PCSwift also improves the speed of your internet connection; these system changes work with all internet connections such as Cable, DSL, U-Verse, Fios and dial-up. If you notice during multiplayer gaming that you are getting long pings and lag, PCSwift can help improve the speed of your connection. PCSwift makes several Windows registry changes to improve how networking packets are transmitted and received, we increase the buffer sizes which allows data to be transmitted and processed faster on your computer, allowing games, web browsing and downloading files to work much faster.  Optimizing your Windows environment to work faster is a no brainer. Just like tuning a car to get higher performance, PCSwift tunes your PC's hardware to work faster which improves your computer and internet performance. PCSwift performs a quick tune-up, fixes problems and optimizes the performance of your computer and the speed of your internet with a few clicks of the mouse. Download a trial version of PCSwift today and unleash the full power of your computer hardware for a faster computer and internet.